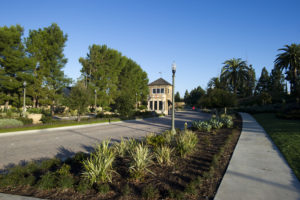 There are many environmentally friendly and horticulturally sound reasons to install mulch in the landscape. Among the primary benefits are the following:

3. Disease Control - Mulch can help lessen the spread of soil and water borne diseases by reducing the splashing and run off that occurs during irrigation and rainfall.

5. Chemical Use Reduction - Mulch can reduce the use of herbicides and pre-emergents by reducing weed germination.

6. Soil Erosion - Mulch prevents erosion by providing a buffer from irrigation and rainfall.

7. Soil Fertility - Mulch helps reduce the need for fertilizers by supplying soils with nutrients as micro-organisms contained within it are released during the natural process of decomposition.

10. Paths and Trails - Mulch is an increasingly popular addition to paths and trails where cosmetic appeal, erosion control, and weed suppression are important goals.

11. Cost Savings - Mulch saves money on landscape costs for all of the reasons listed above!